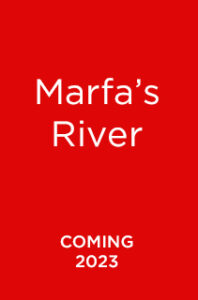 Excerpt from the Book

Marfa can hear shouting as soon as she enters the stairwell at 17 Rue de la Querelle. The house is old, its faded brick façade powdered with mortar dust. “The one with the green window frames, there,” the woman at the corner store had directed, taking a ruddy hand out of the pocket of her smock to gesture down the rain-washed street. “Tell them to put a number on it and finish painting the trim.” Marfa hears her mutter, “Immigrants,” before she shuts the door.

The first floor windows are tall, one freshly outlined in dark green paint, the other one peeling, the sill repaired with a strip of raw wood that stands out like a scar on a wounded soldier. Marfa shakes the thought away. It’s just a piece of wood, she tells herself. The war’s over.

The narrow stairs are unpainted but swept clean. The man’s angry voice carries a whining note that reminds her of her father. Only Tato didn’t shout; his rage came in whispers, disguised as ordinary speech.

On the third floor, the door stands open.

Marfa starts to reply, but the man’s back is turned. She can’t see who he’s talking to.

“Did I raise a son to be a delivery boy? Why do you think I run this studio if not for your benefit, your future?”

Marfa edges along the wall of the room, under a slanted ceiling held up at intervals by seasoned roof beams. She thinks of leaving. The unfolding family drama makes her feel like an intruder, even though none of the people seated at long tables along the windows raise their heads from their work. Charles Aznavour croons a love song from a station tuned to Radio Luxembourg, his gravelly tenor an odd counterpoint to the confrontation in the room.

No, she decides. It’s already late afternoon. After weeks of facing closed doors and regretful head-shaking, she’s not leaving without making an effort. She’s hungry. She waits.

The boy stands, shoulders stooped, his jaw set in a hard line as if he’s fighting back a reply. He is slightly plump, a full head shorter than his brawny father. “The Belgians will give you schooling,” the man continues. “You can study law, engineering, anything. You think I wanted to be a rug dealer? If only I’d had your opportunities, if there had been no war. What future is there in doodling with paints and notebooks?” He waves his arm in the air. Marfa sees the boy cringe and step back. “Say something! Be a man for once.” The man drops his arm to his side, takes a cigarette from a box on the sill, lights it and inhales.

The boy pushes a lock of hair off his forehead. “You smoke too much.” He starts toward the door.

“Where are you going?”

“To finish the window, outside.”

“At least that’s useful. Get the damn city beautification people off my back. Goddamn socialists,” the man grumbles, then shouts at his son’s retreating back, “But I could have a workman do it.”

Marfa moves aside to let the boy pass. He’s older than she had first thought, but surely not more than nineteen, the age she had been when Hitler was defeated eleven years ago. His face is flushed, there’s a hint of a tremor around his mouth and chin. His gray-green eyes lock with her brown ones for a moment; they flash with rage and frustration.

“Why are you here?” It takes her a moment to realize the man is now addressing her.

“I … the work,” she stammers. “My friends Galina and Filip, they said you have work.”

“So they’re gone, are they? To America.” He sighs. “That’s where the future is. He had a good hand, Filip, a nice touch on the canvas. And Galina, a hard worker. What can you do?” His eyes are the color of seawater, the same as his son’s but piercing, impatient. “Speak up. I can’t stand here talking all day.”

“We don’t need servants here. Can you paint, from a pattern?”

Marfa raises her chin, determined not to walk away with nothing. “I can learn,” she says. “Teach me.”