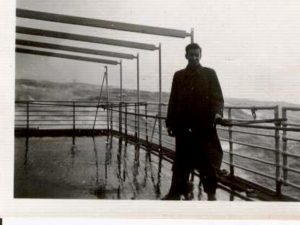 My intrepid father on board the SS Italia, sometime between March tenth and twenty-first, 1956. We sailed from Antwerp, Belgium, where the sun was shining and the sky was clear blue. Rough seas delayed our arrival in New York by one day, though for me, at nine years old, the trip was a continuous adventure, with free movies and board games and good food. Not so for my poor mother, who only saw the dining room on the first day; she spent the rest of the voyage in our cabin, fighting off seasickness.

He taught me chess, on one of those leisurely afternoons. It was a hobby for which he harbored a lifelong passion, playing for years the old-fashioned way – by correspondence with other enthusiasts around the world. Invariably, when people gathered at our home, one corner of the table would be cleared for the chessboard. Amid the music, laughter, conversation, the eating and the drinking, the game would begin, and only end when the last man standing declared his unequivocal victory.

I took no part in those competitions. I was only a middling player, but managed to hold my own until the day my son, aged twelve, roundly defeated me time and again. The new generation had arrived.